The decadent poet and critic Arthur Symons (1865–1945) visited Berlin in 1891. He left a fragmentary account of the city’s nightlife and a poem about a Polish girl named ‘Emmy’.

The poet and critic Arthur Symons (1865–1945) has left us a vivid, fragmentary account of a decadent night out in Berlin during his visit in 1891. Symons and his male friends started their evening in an upstairs room on the second floor of the upmarket Concert the Noblesse, a renowned café chantant on the corner of Friedrichstraße and Französische Straße; and they ended it at half past two in the morning at the Preinitz on Leipzigerstraße. In between, they called at several other establishments in what was then Berlin’s prime entertainment area, including the ‘tunnel’ Café Renz underneath Karlstraße, which Symons described as their ‘lowest depth’, and a place that he remembers as the ‘Embergohalle’ on Schumannstraße (Symons’s spellings of German words can be unreliable). Here Symons met a Polish girl named Emmy Dobschin, who fascinated him with her odd mixture of innocence and knowing. He immortalised her in the poem ‘Emmy’, in Silhouettes (1892).

Symons was a devotee of decadent literature and he loved to spend time in seedy joints and music halls. In the final decade of the nineteenth century, he was drawn to Berlin by the growing reputation of its wild nightlife. He spent two months in the city as a guest of the eccentric American anthropologist Josiah Flynt Willard, his wife and their daughter, Katherine. Katherine Willard, to whom he would dedicate Silhouettes, took Symons to concerts and theatre performances. Symons and Josiah Flynt were planning to co-author an illustrated sociological study of Berlin cafés, which, however, never saw the light of day.

Indeed, aside from the poem ‘Emmy’, Berlin seems to have systematically robbed Symons of inspiration. This prolific travel writer who wrote lush portraits of so many European cities, never managed to turn his impressions of Berlin into a complete essay. Instead, he published them in note form many years later as part of his collection Wanderings (1931). Decades later, the Francophile Symons still distinctly recalled his ‘hatred’ of Berlin, which stemmed from the restrictions of individual freedom and the feeling of discomfort he experienced everywhere. Negative and patchy though they are, Symons’s memories are important because they provide a rare turn-of-the-century sketch of Berlin by a major British writer. Stefano Evangelista 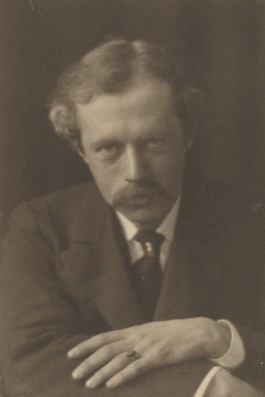