Berlin through English Eyes maps the presence of English-speaking writers in the city. It provides information on writers who visited Berlin in the early twentieth century, and how they interacted with the spaces and culture of the city.

Berlin through English Eyes charts how English-speaking writers encountered the city of Berlin and how they wrote about it in their published and private works. This website is aimed at researchers, students, and readers of English literature, as well as at Berlin’s residents and visitors who want to know more about the city’s cosmopolitan heritage.

The site maps the interaction between literature and urban space, reconstructing a network of places, authors, and texts. A map of 1931 Berlin shows places that had a special significance for English-speaking writers. These range from private homes to cultural institutions, cafés, hotels, cinemas, and cabarets. Concise essays on individual writers provide information on their connections to the city and to other writers. All content is written by academic specialists.

In this initial phase, the site concentrates on the period between the turn of the twentieth century and the onset on the Nazi regime. These were particularly meaningful years in the city’s history. After the Franco-Prussian war, Berlin rapidly transformed itself into a world city, a process that was marked by an exponential growth in population, infrastructure, and cultural ambition. The First World War, and the revolutionary chaos and inflation that followed it, placed the city under considerable strain. But during the Weimar Republic, Berlin rose to international prominence again: it gained a reputation as a progressive and often transgressive place, a rival to London and Paris in terms of cosmopolitan culture.

Berlin was noted for the arts, notably cinema, and its tolerant attitude to LGBTQ+ communities; but it was also rife with urban poverty and political tensions. The last years of the Weimar Republic were of course also overshadowed by the rise of Nazi totalitarianism. As we mark the centenary of the roaring or, as they are called in German, ‘golden’ 1920s, it seems timely to look back on this complex period.

Christopher Isherwood’s iconic portrait of Berlin has been extensively enjoyed and scrutinised. The very prominence of his Berlin, however, has drowned the voices of many other English writers who visited the city during its international art boom in the early twentieth century. The long list included familiar and less familiar writers, ranging from the decadent poet Arthur Symons to the aristocratic diarist Evelyn Blücher, from the pacifist H.G. Wells to the Nazi-leaning Wyndham Lewis, from Rupert Brooke and T. E. Hulme to Virginia and Leonard Woolf, from psychoanalytic pioneer Alix Strachey to film enthusiasts Bryher and Kenneth Macpherson. Berlin left an important mark on all of these writers. 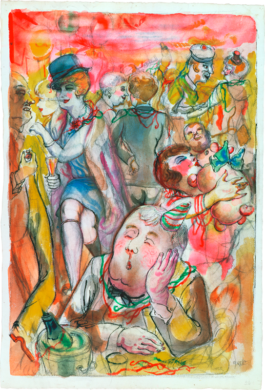 We hope you enjoy your visit. Please don’t forget to cite ‘Berlin through English Eyes’ when using material from this site.

Stefano Evangelista is associate professor of English literature at Oxford University and fellow of Trinity College. He specialises in the literature of the turn of the twentieth century, viewed from comparative and transnational perspectives. His research on literary cosmopolitanism has attracted competitive funding from the Arts and Humanities Research Council and from the British Academy. His monograph, Literary Cosmopolitanism in the English Fin de Siècle: Citizens of Nowhere, was published by Oxford University Press in 2021. Stefano Evangelista has held visiting professorships at Bologna, Chuo University, Paris Nanterre, and Paris Sorbonne. He has been a regular visitor to Berlin since the early 2000s and, since 2013, he has been a fellow of the Centre for British Studies, Humboldt-Universität zu Berlin.

Gesa Stedman is professor of British culture and literature at the Centre for British Studies, Humboldt-Universität zu Berlin. She undertook her research on the Victorian discourses of emotion as a visiting graduate at Harris Manchester College, Oxford and initial research for the Berlin project as a visiting scholar at Trinity College, Oxford. Other interests include cultural and literary exchange between England and France, and between England and Germany. Her most recent publication with a literary and historical focus is a special issue on World War I and its aftermath, published in the Journal for European Studies in November 2021.