Bryher (born Annie Winifred Ellerman) (1894–1983) was a modernist writer and film pioneer who spent several periods in Berlin in the 1920s to be analysed by Hanns Sachs, and to engage with German and Soviet cinema. An account of her time in Berlin can be found in her memoir The Heart to Artemis (1963).

Annie Winifred Ellerman (1894–1983) was the daughter of the rich shipping magnate Sir John Ellerman. She renamed herself Bryher, after the Scilly Isles, and became an important patron of modernist writers in London and Paris, such as Gertrude Stein. Bryher married first Robert McAlmon and later Kenneth McPherson, a marriage of convenience in each case. She was later to become the lover of the modernist poet H.D. whose daughter Perdita Bryher helped to bring up. Bryher, H.D., and McPherson were all members of the POOL group of modernist writers. In 1927 they founded the film journal Close Up, which argued that film ought to be appreciated as an independent, serious art form. In 1927, they travelled to Berlin, where they were shown around the Babelsberg Studios near Potsdam, and met the German film director G.W. Pabst, whose films such as Pandora’s Box or Die Freudlose Gasse have become classics. There were numerous connections between the Close Up group and Weimar cinema, not least with the shadow artist Lotte Reiniger.

In Berlin, Bryher also encountered the psychoanalyst Hanns Sachs, who, together with other trusted Freudians such as Karl Abraham, analysed patients and taught analysis at the Berlin Psychoanalytical Institute. Bryher returned to Berlin for several months each year, to watch Soviet and other avantgarde films, and to be analysed by Sachs with a view to becoming an analyst herself – a career she ultimately did not follow.

Bryher also tried her hand at film-making. One of her experimental films which uses psychoanalytical motifs – Borderline – was shown in Berlin in April 1931. The mixed audience reactions ranged from outrage to admiration.

‘I fell in love with Berlin at once to my own amazement. [...] In the sharp bite of the air of the North I could watch the first patterns evolve of the postwar decade. [...] We were conscious that we were standing near the center of a volcano, it was raw, dangerous, explosive but I have never encountered before or since so vital a response to experimental art.’

In Film Problems of Soviet Russia (1929) she suggests English audiences ought to be allowed to make up their own minds, and argues strongly against British censorship of Soviet films. Watching uncensored Soviet films was a strong pull factor for British visitors to Berlin: ‘Don’t “See England First,” but make for the Ursulines, the Ving Huit or Berlin next holiday. Judge for yourself what the censor considers unfitted for you. Then come back and decide whether this humiliating position accords with the traditions of England, which they proclaim they are keeping in surety.’

Bryher left Berlin in 1933 and spent most of her life in Switzerland, where the Berlin (film) architects Alexander Ferenczy and Hermann Henselmann had designed her Bauhaus-style house, Kenwin. She helped Jewish people emigrate during the late 1930s and during the war. Gesa Stedman 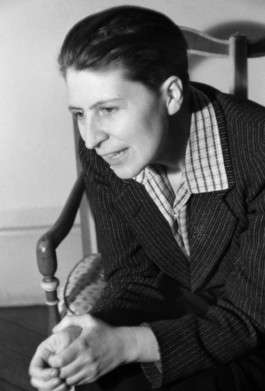 Bryher, The Heart to Artemis. A Writer’s Memoirs (London: Collins, 1963)

Marcus, Laura, ‘“Never be anchorage / never be safety / only be the kino.” Weimar Berlin Cinema

and British Connections“, in Happy in Berlin? English Writers in the City, The 1920s and Beyond, ed. Stefano Evangelista and Gesa Stedman (Göttingen: Wallstein Verlag, 2021), pp. 121–146