Elizabeth Wiskemann (1899–1971) was an English journalist, historian, and spy of Anglo-German descent, whose frank articles for the left-wing New Statesman and Nation led to her being imprisoned by the Gestapo and narrowly escaping to England in 1936.

Elizabeth Wiskemann (1899–1971) trained as a historian at Cambridge University and alternated visits to Germany and Berlin with teaching to finance her travels. Her attempt at receiving a PhD failed but later in life she was to become the first female professor at Edinburgh University, which commemorates her time as professor of international relations with a plaque. Wiskemann’s memoir The Europe I Saw, published in 1968, contains revealing archival material, both from the German police and from the British left-wing journal New Statesman and Nation.

Wiskemann was an astute observer of the rise of fascism in Germany, and in Berlin in particular. She was aware of the dangers to Jews and Communists, rightly predicted the horrors which SS-leaders such as Reinhard Heydrich would commit, and how pernicious the infiltration of National Socialists in every institution was to be. Sadly, on her return trips to London she found the English establishment at Westminster, bent on appeasement politics, unwilling to listen. Very few photographs of Wiskemann exist, and some information about her is to be found in the Dictionary of National Biography. The most extensive research about this politically aware and independent writer was compiled by Peter Kamber, author of a fictionalised spy novel based on Wiskemann and her time in neutral Switzerland. Kamber’s notes contain an extensive account of his research into her career, which deserves greater attention than it has hitherto received.

Wiskemann had by her own account been on the fringes of the Bloomsbury Group, but found Berlin’s fast-paced life as well as its more radical left-wing politics completely different. Wiskemann knew staff at the British embassy well. She was also in close contact with fellow journalists such as The Times Berlin correspondent Norman Ebbut. Ebbut played a role in her escape from the Gestapo prison to which she had been sent in 1936 because of her outspoken articles. She had to leave Germany and never returned during the reign of the National Socialists. As she rather drily reports in her memoirs, she continued to observe events in Berlin and Germany from Switzerland, where she was engaged in secret work for the Political Warfare Executive. Her journalism provides insights into her observations and the all-pervading changes that the National Socialists wrought on Germany as a whole, and on Berlin in particular, thus presaging the future. Wiskemann’s books on fascism in Italy, on Czechoslovakia, and on the Swiss Neue Zürcher Zeitung were well-regarded at the time but are now out of print. Gesa Stedman 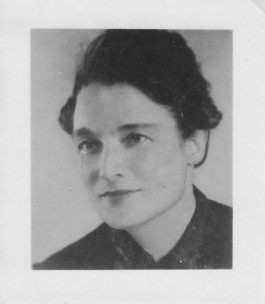 Elizabeth Wiskemann. Photographer and date unknown. Reprinted by permission of the Secretary to the Delegates of Oxford University Press

Stedman, Gesa, ‘British Women Writers in Berlin: From the Cage of Diplomacy to the Gestapo Prison’, in Happy in Berlin? English Writers in the City, The 1920s and Beyond, ed. Stefano Evangelista and Gesa Stedman (Göttingen: Wallstein Verlag, 2021).