John Chancellor was the pseudonym of the crime fiction writer Ernest Charles de Balzac (1900–1971). He was the author of How to be Happy in Berlin (1929).

John Chancellor was the pen name of Ernest Charles de Balzac (1900–1971). He was the author of a series of crime and adventure novels that enjoyed popularity in the 1920s and ’30s – some were even translated into French. There is little biographical information that is readily available on Chancellor, but we know that he lived in Paris for a while and that he published an alternative guide to that city titled How to be Happy in Paris Without Being Ruined! (1926), which went into several editions. Some time in the 1920s Chancellor also spent enough time in Berlin to produce a knowledgeable sequel to the Paris book, How to be Happy in Berlin (1929). Berlin’s mounting international reputation as a centre for the arts and hedonism meant that its profile as tourist destination was changing. Chancellor’s book encapsulates this change. How to be Happy in Berlin catered for visitors who were more interested in what we would now call ‘lifestyle’, that is, in immersing themselves in the atmosphere of the city, than in seeing monuments.

Chancellor depicts Berlin as a buzzy metropolis, full of character and things to do. First of all, he exhorts English readers to set aside war prejudice, which was still rife in the late 1920s. He then invites them to take in the city’s modern as well as traditional sights. An enraptured description of the Bayreutherstraße gasometer in the moonlight, for instance, compares it to ‘the palace of the King of Robots […] a theatre where all the actors are machines, and the audience huge silent men in gleaming dress-shirts.’ Chancellor gives instructions on how to enjoy Berlin café culture, recommending the Romanische Café as a good place to mingle with writers, artists, and musicians. He is enthusiastic about German cinema, which he lists among the top attractions of the city. His overview of the city’s nightlife includes a euphemistic but tantalising description of The Eldorado Cabaret [link], which was a famous transvestite venue. Stefano Evangelista 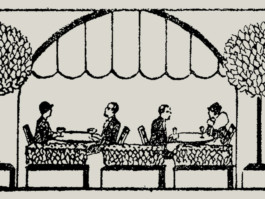 Vignette from John Chancellor, How to Be Happy in Berlin (1929), © Bodleian Library, Oxford

Chancellor, John, How to be Happy in Berlin (London: Arrowsmith, 1929)