(1901–1980), academic, translator, secret agent, who was friends with Christopher Isherwood and taught at Friedrich-Wilhelm-Universität in the late 1930s. He features both in Isherwood’s work of autofiction Christopher and His Kind, and in his Berlin novels.

William Douglas Robson-Scott (1901–1980) taught English language at Friedrich-Wilhelm-Universität [link] in Berlin during the 1930s, after taking a degree in English at Oxford University, where he had studied between 1919 and 1924. It is unclear whether he resigned his position in Berlin voluntarily or not. His friend and fellow Berlin writer Christopher Isherwood relates the effects of the critical attitude towards Nationalsocialism which Robson-Scott made quite clear to his students: ‘Some of the students were outraged and walked out of the classroom. Complaints were made to the university authorities.’ Christopher Isherwood, Christopher and His Kind, 1976

The personnel files of Humboldt-Universität zu Berlin (which was renamed in 1949) tell a slightly more complex story. At the request of an unidentified member of the university named Brökelmann, students and staff were asked to report on Robson-Scott’s political attitude. The student representative Otto Kalthaus reported on 7 September 1935 that Robson-Scott kept his distance from staff and students and alleged he was either too cowardly or too careful to utter his personal political opinions. The short report, signed “Heil Hitler”, then mentions, although unproven, that Robson-Scott might be a spy.

Professor Friedrich Schönemann, a leading English and American Literature scholar and a trusted source of information for the Ministry of Propaganda and a member of the NSDAP, is more equivocal in his statement he sent to the faculty. Schönemann argues that Robson-Scott’s stay at the university was to be quite short, that his academic credentials were excellent, and that any intervention might lead to international complications since Robson-Scott had connections to the English and Scottish aristocracy. Schönemann does, however, stress that he will put Robson-Scott under surveillance with the help of a colleague from the English department who is said to know Robson-Scott well (25 September 1935).

Robson-Scott left Berlin around 1937 and took up a position at the university of Vienna, where he completed his doctorate in 1939.

According to his former colleague John Flood, this is what occurred at the graduation ceremony:
Apparently the assembled company was addressed by the Gauleiter of Vienna (Odilo Globocnik?) who said something like: “Heute sind unter uns einige frischgebackene Doktoren aus dem Ausland. Wir rechnen damit, dass sie in ihre Heimatländer zurückkehren und ihren Landsleuten erzählen, wie das Leben im glorreichen großdeutschen Reich ist', at which point Robson-Scott muttered under his breath, 'We most certainly will!” (John Flood, email correspondence)

When Robson-Scott arrived in Berlin, the Berlin Psychoanalytic Institute, founded in the 1920s, was already in the hands of the Nationalsocialists but like Alix Strachey and other Britons in Berlin, Robson-Scott had a keen interest in psychoanalysis. He had become acquainted with it through a school friend, Adrian Stokes, and according to Christopher Isherwood, this is the only similarity which the real Robson-Scott and his namesake share in Isherwood’s Berlin novels. In 1928, Robson-Scott’s translation of Freud’s The Future of an Illusion was published by the Hogarth Press. In 1932, he translated Helene Deutsch’s Psychoanalysis of the Neuroses (again for the Hogarth Press). Together with his wife Elaine, a professor of German at Cardiff University, Robson-Scott translated the letters of Freud and Lou Andreas Salomé (1972), whose salon Alix Strachey had attended in the 1920s. They also translated the correspondence between Freud and Arnold Zweig (1970). Robson-Scott’s own research interests were wide-ranging, comprising not only psychoanalysis but also Dutch, English and German literature and art. His doctoral thesis was published as German Travellers in England 1400–1800 in 1953 and in Germanist circles he is perhaps best known for his last book The Younger Goethe and the Visual Arts (1981).

Robson-Scott was very reticent about his time as a secret agent, and he quickly returned to academic life in 1945. He held a distinguished career as Professor of German at Birkbeck College. From 1968 till 1973, after retiring from Birkbeck, he was Honorary Director of the Institute of Germanic Studies at the University of London. In honour of his wide-ranging research interests and keen support of academic exchange, the University of London awards an annual travel bursary for postgraduate students of German, Dutch, and Scandinavian languages in his name. Gesa Stedman 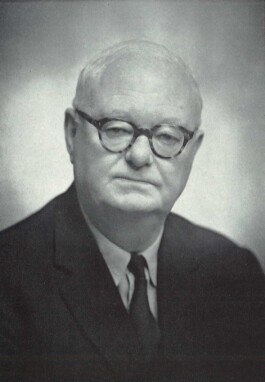 William Robson-Scott as a retired professor of German, 1968 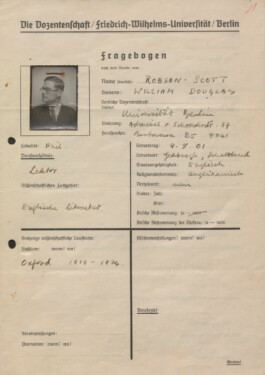 Photograph of William Robson-Scott as a young lecturer, aged about 34, at Friedrich-Wilhelms-Universität, © 1935

Brison, Charmian and Richard Dove, A Matter of Intelligence. MI5 and the Surveillance of Anti-Nazi Refugees, 1933-50 (Manchester and New York: Manchester University Press, 2014) 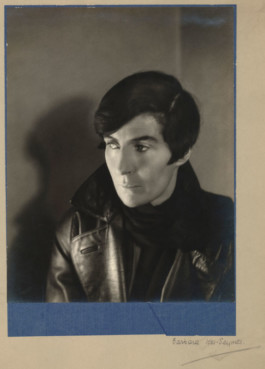