Lutherstraße 31–32 [from 1963, Martin-Luther-Straße  13] and on the corner of Motzstraße and Kalckreuthstraße – The Eldorado cabaret was an internationally famous transvestite venue that consisted of two sites in the district of Schöneberg. It features in literature and art from the period of the Weimar Republic and attracted many English visitors.

The Eldorado cabaret was an internationally famous transvestite venue that consisted of two sites in the district of Schöneberg. It features in literature and art from the period of the Weimar Republic and attracted many English visitors.

The Eldorado was one of most iconic cabarets of the late 1920s and early ’30s, with two sites in the district of Schöneberg, close to Christopher Isherwood’s home on Nollendorfstraße 17. The more popular one with British visitors seems to have been the one located at the corner of Motzstraße and Kalckreuthstraße. The Eldorado was famous for its transvestite scene, which was immortalised by various writers and artists including Otto Dix. It is mentioned in several of the unofficial Berlin guidebooks that came out in the 1920s. In How to be Happy in Berlin (1929), John Chancellor gives a mini-lecture on cabaret etiquette, with which he obviously expects his English readers to be unfamiliar. He then includes the Eldorado in the guise of ‘a warning to the unwary tourist ‘[…]. If you go in, go alone and on no account allow your wife or sister to accompany you; and go in with no other expectation than that of seeing how a section of the other half of the world lives.’

Chancellor’s mixture of reticence and encouraging reassurance is a good encapsulation of the status of the Eldorado as the most respectable of Berlin’s unrespectable gender-queer nightspots. Truly seedy bars like the Cosy Corner were not mentioned in guidebooks. By contrast, the Eldorado attracted both a bohemian and queer scene, and a curious middle-class public that came to enjoy the gender-bending spectacle. Several male British writers, including Harold Nicolson and Edward Sackville-West stepped into the glitzy bubble of the Eldorado, often as the first stop on a tour of the city’s nightlife.

Wyndham Lewis provided one of its most memorable English descriptions in his 1931 book, Hitler, which details his early infatuation with the Nazis. Repelled though he was by what he saw there, which he described in homophobic and racist language, Lewis believed that, if the Nazis came to power, they would not be too worried about places like this because they were not moralists. He was wrong of course: the Eldorado was closed as part of the Nazi’s crusade to eradicate Berlin’s LGBTQ+ subcultures. After the war, the Eldorado acquired near mythic status as a symbol of the tolerant and transgressive ethos of the Weimar Republic. Stefano Evangelista 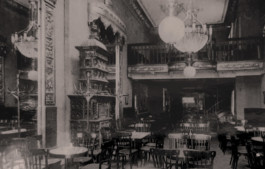